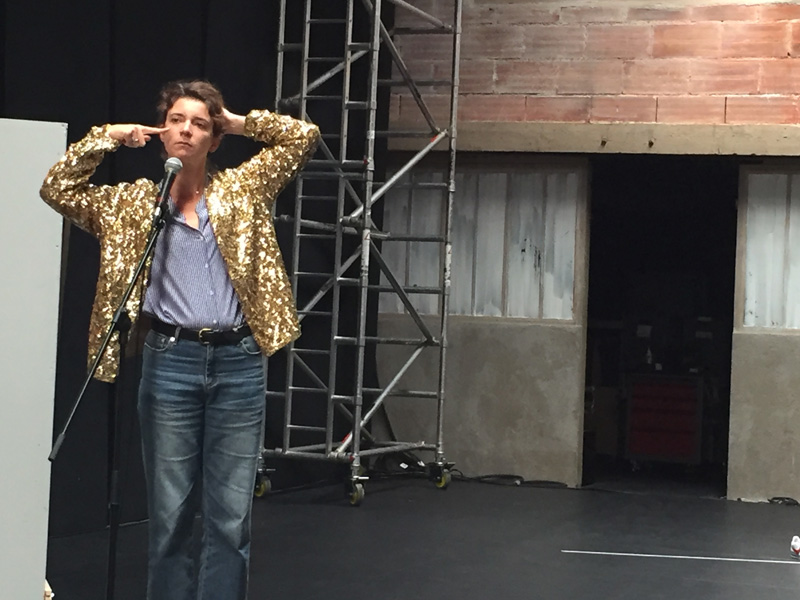 With Première , Chloé Déchery tackles a new creative project that brings into play, in a shared way, with humor, with irreverence, sometimes on the edge, the questions of female ambition, patterns of success and self-invention.
To do this, she develops a scenic research work that incorporates elements and materials borrowed from other fields of activity – popular song, gardening, disguise, feminist theory, the constitutional code – to question, on the modes of unfolding and deployment, what a word spoken by a woman artist, on a set, that is to say a public word that mobilizes imaginations, declines identities and tries to thwart assignments, can engage self, through performative discourse, speculative narrative and the transformative power of the stage.

The project, which has been developing through a series of research residencies since September 2019, unfolds from three entries:

One of the first hypotheses of this multi-disciplinary work (theater, performance, dance, sound creation, video) postulates the emancipatory and playful power of self-invention through the figures of the alter ego (mythified and/or abject). By examining the patterns of representation linked to excellence and success, it will be a question of questioning « fama » (name, reputation) as much as « in-fame » (anonymity, darkness).

Between 2019 and 2021, the project was hosted in research and creation residencies at the Studio-théâtre de Vitry, at the Center National de la danse, at 104, at pad-Cie Nathalie Béasse in Angers and at Critical Path in Sydney, Australia. .

In French, “Première” means the opening night.
It also designates the woman who is the first one; the woman who excels at what she does.

With Première, Chloé Déchery is developing a new performance project that seeks out to articulate questions around female ambition, authorship, success/failure and the reinvention of the self through performative speech and speculative fiction.

One of the first hypothesises of the work is to invest in the emancipatory and playful potential of the alter ego, either searching for aggrandizing, mythological figures of the self or seeking to explore abject and infamous alter egos. In the word “infamous” lies the latin root “fama”, that is the « name » that brings the reputation, the recognition, the fame. We will look at what happens when we renounce both our names and our reputation.

For this project, Chloé Déchery is developing performance work that borrows from other fields and activities ranging from popular music, fancy dressing-up,  gardening, feminist theory, law texts to the format of the academic conference or the professional TV interview. She seeks to interrogate how discourses and gestures delivered by a female artist can emerge and take place on stage, that is how words and actions can take place in the public sphere, informing new imageries, declining plural and contradictory identities, beyond dualist attributions, and therefore questioning, with lightheartedness and humor, issues revolving around female ambition, creativity and the joy of failure.